The Colour of Love (A book review) 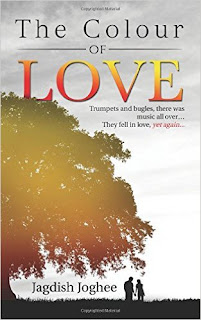 Blurb- Sarfaraz is brought up with a good value system by his devoted parents. With time, curiosity and adolescent growth pangs take him through many experiences. His first brush with girls starts with a friend and slowly meanders into casual flirtatious affairs with girls at college.
All through it, he realizes that none of them have his undying, true love. A time comes when he realizes who he truly loves, and in the midst of it all, he handles brutal enmity and takes on vile characters that misbehave with his friends.
Sarfaraz grows up in Coimbatore where a series of bomb blasts occur. His identity is called into question, as his status as a Muslim makes people see him as an enemy. He loses something precious in the blasts and leaves to Sharjah, only for life to find him and surprise him.

Book Review- ‘The Colour of Love’ is Jagdish Joghee’s second novel. I had the opportunity to review his debut work- ‘In Love and Free’ a few days ago. If I compare the two books, I can clearly see the small steps taken by the author on the path to becoming a better writer. Though grammatical errors are still in abundance, the characters are etched in a mature way. The story has many twists and the climax is heart-warming.

The author considers himself more of a storyteller than a writer. I have respect for Jagdish Joghee, the storyteller but as a writer, he still has a long way to go. He is passionate about the stories he wishes to tell us but needs someone who can fine tune the rough edges of the works composed by him.

Here, the role of the publisher comes under scrutiny. The ‘editing’ and ‘proofreading’ of any manuscript is as much the responsibility of a publishing house as the author. But in this era of self-publishing, literary merit of many books has taken a severe beating. This novel, if edited properly would have been in a much better shape.

About the Author-Born and brought up in the beautiful hill town of Coonoor in Nilgiris, Jagdish Joghee has always been attracted to the hills and the forests. Growing up in the midst of serenity, Jagdish had enough inspiration to write short poems during his school days. He now lives in the city of Coimbatore in Tamil Nadu where he works for a leading global information technology services company. Jagdish has worked in some of the top IT companies in India, which required him to travel to some of the major cities in the country and overseas too. His passion for writing started early during his school days. Being a closet writer, Jagdish's writing was initially confined to journals and scrapbooks. He could not pursue his dream of becoming a journalist when he started working in the IT-enabled services industry. Jagdish is an active blogger and writes on issues that have a social impact, apart from reviewing Indian movies. He considers himself more of a storyteller than a writer. Jagdish wants to write novels that will keep readers engaged with a good mix of romance, revenge, laughter and thrill. He is also keen to explore the realm of fantasy.