In Love and Free (A book review) 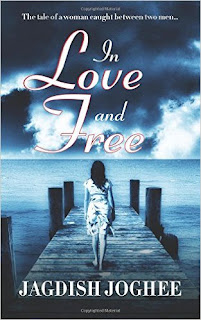 Blurb- Shruthi has everything going in her life with great education, incredible romance, a wonderful husband, and two adorable kids. There is plenty of laughter, joy, and love in the cozy nest that Shruthi has carefully built. All is well until that fateful Diwali day when passion gets the better of reason. One momentary lapse threatens to uproot the entire foundation of her beautiful life. The stakes are too high as Shruthi runs the risk of being abandoned by her husband and losing her children too. And there is no one to blame but herself. Caught in a cesspool of blackmail, ransom, revenge and remorse, Shruthi is on the brink of collapse. She can run but cannot hide.

Book Review- “In Love and Free: The tale of a woman caught between two men”, as the name specifies, deals with the issue of infidelity. The premise is not new as the issue of adultery and the complications that are certain to follow (at least in fiction) is a concept that has been done to death in movies as well as literature. While there is nothing wrong in choosing an old topic, the need of the hour was a fresher perspective. The drama unfolds in a predictable manner and the story meanders towards deceit and crime.
The numerous grammatical mistakes do nothing to salvage a bland tale.

On a positive note, the author has etched the character of Shruthi, the female protagonist of the story, well. She has been portrayed as a strong-willed woman who likes to dominate the events around her. She has no qualms about succumbing to the pleasures of the flesh and wants to live life on her own terms. The way she deals with the crisis in her life is commendable as she does not surrender to the dictates of the antagonist. However, the climax could have been different; Shruthi choosing the easier way out by deciding to sacrifice her life as a penance for her 'sins' smacked of a misogynist mindset on the part of the writer.

About the Author-Born and brought up in the beautiful hill town of Coonoor in Nilgiris, Jagdish Joghee has always been attracted to the hills and the forests. Growing up in the midst of serenity, Jagdish had enough inspiration to write short poems during his school days. He now lives in the city of Coimbatore in Tamil Nadu where he works for a leading global information technology services company. Jagdish has worked in some of the top IT companies in India, which required him to travel to some of the major cities in the country and overseas too. His passion for writing started early during his school days. Being a closet writer, Jagdish's writing was initially confined to journals and scrapbooks. He could not pursue his dream of becoming a journalist when he started working in the IT-enabled services industry. Jagdish is an active blogger and writes on issues that have a social impact, apart from reviewing Indian movies. This book marks his foray into fiction. He considers himself more of a storyteller than a writer. Jagdish wants to write novels that will keep readers engaged with a good mix of romance, revenge, laughter and thrill. He is also keen to explore the realm of fantasy. - See more at: https://notionpress.com/read/in-love-and-free#sthash.6tTejEDz.dpuf