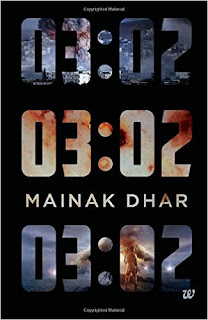 Blurb- At 03:02 on a Sunday morning, the world as we knew it came to an end. Mumbai suddenly went black — no electricity, no phones, no internet and no working cars. It was as if someone had turned off the master switch of our civilization, turning us back hundreds of years overnight. We learned that it was not just Mumbai, but much of the world that had been impacted. We also learned that it was no accident. A deadly enemy was behind it. An enemy that was now in our midst, seeking to conquer us and destroy our way of life. This is how our war for freedom began. A war that was to be waged not on the borders or by the Army, but in our homes and streets, with us as the soldiers. This is our story. '03:02 celebrates fictional heroes who fight for our freedom, but to give back to the real heroes who do so every day, for every copy sold, a contribution from author royalties will be made to the National Defence Fund, which takes voluntary contributions to help armed forces service members and their families.'

Book Review- “03:02” is a rather unconventional name for a novel. But then, so is the ‘thriller’ genre as far as writing fiction in India is concerned. The market is flooded with half-baked ‘chic lit’ romances catering to the teens at heart and/or mythological tales being packaged and served as something fresh. As is evident from the author’s resume, this is not his first book and an experienced hand at play is evident as you turn the pages. The narrative is lucid and devoid of any grammatical glitches. The story is fast paced and you relate to the events unfolding in this thrilling story. I have seen a few Hollywood movies which have this ‘science fiction’ feel and have relished almost all of these. Well, do not be surprised if this story gets molded into a script for a ‘Bollywood’ flick.

On the flip-side, the incorporation of a love story in the midst of the ‘war’ does mar the pace of the book at places. The author, however, does succeed in pouring emotions in the cauldron of romance.

Verdict- Worth every penny spent.

About the Author-After finishing his schooling at Modern School, Barakhamba Road and his under-graduation at Hindu College, Delhi, Mainak Dhar graduated from the Indian Institute of Management, Ahmedabad. He has spent two decades in the corporate sector starting with Procter & Gamble in India. He spent eighteen years with P&G, fifteen of them outside India across the Asia Pacific region. In 2014, he moved back to India as the CEO of the India operations of a major consumer products multinational. A self-described cubicle dweller by day and writer by night, Mainak is also the author of over a dozen books, some of which have been bestsellers in India and abroad. These books have been translated into Turkish, Vietnamese, Japanese, French, German and Portuguese. He lives in Mumbai with his wife, Puja and their son, Aaditya. When not at work or with his family, he can usually be found working on or thinking about his next book.