Hell! No Saints in Paradise - A book review 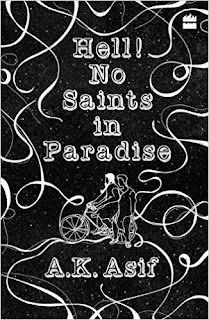 Blurb- 2050, New York. In the aftermath of a grueling spiritual cleansing quest, Ismael, a Pakistani-American student, enters into an alliance with spiritual beings who send him on a perilous journey of self-discovery. A non-believer, Ismael must return to Pakistan, now in the grip of a brutal fundamentalist government, and gain the trust of his estranged father, a prominent extremist in the Caliphate. To accomplish this, he must pose as a true believer. Will he survive long enough to infiltrate his father's inner sanctum and complete his mission? Hell! No Saints in Paradise is both biting satire and allegory that takes urban fantasy to dizzying heights.

Book Review- “Hell! No Saints in Paradise”, is a unique name for a unique book. In fact, it was the title of this book that forced me to opt for reviewing it in spite of a hectic schedule.
The author A.K. Asif has come up with a gem of a book- a book which defies genres. If you look up on Amazon, it is categorized as Classic/contemporary fiction. But believe me, there is more to it than meets the eye. I have shared the blurb here and won’t post any spoiler, although I am tempted to do so. I will just stick to critically evaluating the quality of writing.
The story begins in a dingy café somewhere in Manhattan and the dialogue between the protagonist and “an olive-skinned bespectacled girl” sets the tone of things to follow. The writing is mature, intelligent, and laced with a self -deprecating humor which draws the reader in. The quality of English is at par with the best in business; something lacking in a majority of debutant writers these days.
The story moves at a pace which can be called neither languid nor fast though at times you feel the need to get on with the story. The author takes his own sweet time to delineate the characters and also to create the right scenic atmosphere; the hallmark of a good storyteller.
On the downside, the author could have handled the relationship between Ismael and his father more delicately; it appears linear. The climax left me craving for more-maybe because I expected just a little more of ‘action’.
Pick up this book and cuddle in a blanket on a cold December night-a cup of coffee is optional. You won’t be disappointed, I assure you.

Verdict- A book in a league of its own.

About the Author- Brought up in Lahore, Pakistan, A.K. Asif has been living in the United States since the age of twenty. He is currently working on his next novel.