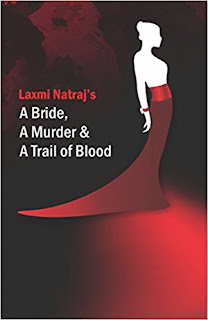 Blurb- The book launched by the Honourable Education Minister Shri Vinod Tawde opens as a crime thriller but finally, focus on the corruption and plagiarism involved in the higher education field.
A newly married bride starting her life in a modern neighborhood is witnessed with bruises and bleeding wounds by almost everyone, leading to a conclusion that the bride is a victim of domestic violence. One fine day the blood spills and visible sign of violence in the house, indicates towards the possibility of a brutal attack or even a murder of the bride, as both the bride and husband Professor are missing.
As the police investigate further and evidence piles up against the professor, the accused is found finally, But he shocks the police by saying that he was never ever married to any girl.
The story twists and turns with heated arguments of court scenes where the defense and the prosecution collide head on to prove their point. As the reader almost decides that the story has concluded, a blast from the past of the Professor unfolds, revealing the darkest side of the Professor and as the decaying skeletons tumble down from the closet. The reader enjoys a roller-coaster ride of a series of facts too shocking, and spine-chilling, till the last page of the novel. Read on!

Book Review- “A Bride, A Murder & A Trail of Blood” is a commendable effort on part of the author. The book moves at a fast pace and keeps the reader intrigued. It is a quintessential suspense thriller with twists lurking around every corner. The climax leaves the reader gasping for more. The language is simple and the narrative lucid. The characters have been etched with great skill. But at times, the author tends to go over the top while describing the background of a scene.
The book could also have benefitted from smart editing and diligent proof reading. There are grammatical errors in a few places which sway the reader away from the events unfolding in the story and dilute the impact.
The blurb of the book is not the smartest that I have come across. It spills many beans and acts as a spoiler.

About the Author-Laxmi Natraj is an educator with 35 years of teaching experience. She has authored a series of Children's science fiction and adventure books. She has also written two thriller adult fiction books and is working on her third. She also writes short stories in Women's Era and Champak and Gokulam. Recently, she has also taken up blogging and is active on social media.