The Tree with a Thousand Apples - A book review 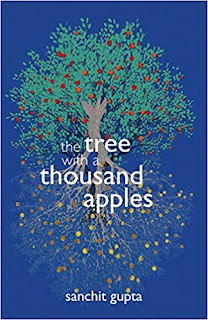 Blurb- Inspired by true events, this riveting narrative traces the lives of Safeena Malik, Deewan Bhat and Bilal Ahanagar, three childhood friends who grow up in an atmosphere of peace and amity in Srinagar, Kashmir, until the night of 20 January 1990 changes it all.

While Deewan is forced to flee from his home, Safeena’s mother becomes ‘collateral damage’ and Bilal has to embrace a wretched life of poverty and fear. The place they called paradise becomes a battleground and their friendship struggles when fate forces them to choose sides against their will.

Twenty years later destiny brings them to a crossroads again, when they no longer know what is right and what is wrong. While both compassion and injustice have the power to transform lives, will the three friends now choose to become sinful criminals or pacifist saints? The Tree with a Thousand Apples is a universal story of cultures, belongingness, revenge and atonement. The stylized layered format, fast-paced narration and suspenseful storytelling make for a powerful, gripping read.

Book Review- In the words of cricketer turned politician Imran Khan-“India is using troops in Kashmir. They are losing the battle of heart and minds. It's like treating cancer with dispirin.” The author has the same ‘take’ on the issue of Kashmir in his book- ‘The Tree with a Thousand Apples.’

According to one of the reviews that I read about this book, ‘the story has its heart in the right place.’ This sums up just about everything about the book.

The writer has tried to inscribe in the genre immortalised by Khaled Hosseini. It is a noble endeavour and the author needs to be lauded for it. There is even a mention of the ‘Kite Runner’ during the course of this meandering tale, pointing towards the influence of the great Afghan-born American novelist. But, the similarities end here. Hosseini uses the turbulent times of Afghanistan as a back-drop against which he weaves his stories, while Sanchit has gone overboard. The Kashmir insurgency plays out almost like the lead actor, visible in every frame. It leaves very little space for the three main protagonists and as a result, their characters are not carved properly. The reader fails to invest in the characters of Deewan, Bilal and Safeena emotionally. There is no lump in the throat when Bilal takes up arms, when Safeena is violated or when Deewan is mutilated.

The writer also commits the cardinal mistake of exposing his lack of knowledge regarding the culture/religion that his characters belong to- A Sikh army officer is shown smoking ‘beedis’ a couple of times in a casual manner.

On the brighter side, the narrative is lucid and typo/grammatical errors almost non-existent. The climax is successful in tying up many loose ends. While reading ‘The Tree with a Thousand Apples’, one develops the sensation of watching a Bollywood movie, albeit, with all the cliches intact.