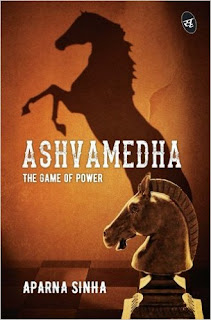 Blurb- "You have to dethrone a powerful man to become the most powerful. I was itching to defeat the single most powerful person, but there wasn't any. I was left with only one choice — to create one."

Little does Ashwin Jamwal know that the last twenty-five years of his life have been controlled by a master manipulator, who wanted to make him the most powerful man on earth, though for a reason! Ashwin steps up to take oath as the youngest Prime Minister of India and is unknowingly thrown into a vortex of power and authority as the entire world is threatened by a faceless enemy — Hades.

The world starts to look up to Ashwin as the savior, but he was just a pawn, reared only to be sacrificed in the end.

A story of greed, lies, deceptions, manipulations and corruption, Ashvamedha is a thriller revolving around the infamous game of power in a maddening bid to seek absolute control.

At the heart of this story, lies a complex protagonist, Ashwin. The rags to riches story of Ashwin, an orphan, is chronicled with great detail. His meteoric rise in politics and his battles with his foes are at the center-stage of the narrative. His romantic escapades further spice up the plot.

‘Ashvamedha’ is a fast paced thriller but as is often the case with driving in the fast lane, control over the narrative tends to slip away at times. Towards the end of the story, many unnecessary characters are introduced, muddling the larger picture. The readers may also end up having conflicting views regarding the climax of the story. I wished it to end on a different note.

The grammar is fine, proof-reading astute and the writing crisp. A good political thriller but not in the league of ‘Chanakya’s Chant’.

About the Author- Aparna Sinha wrote her first poem when she was seven, which she recited on All India Radio. Since then, her literary work and industry specific articles have been published in various media, including reputed business magazines across Asia.

Equipped with a Master's in management, when she was forced to quit her lucrative job because of a chronic disease, she focused on her sole passion – writing.