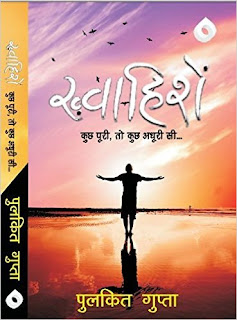 Blurb- "Story of an IITian Turned CA Aspirant". This novel travels across the realms of his life and unfolds his journey of being a ca aspirant from an IITian, and also reflects on the snags it brings to his relationships. Rachit, a young, ambitious boy, hailing from a small town of Western UP, has big dreams. Destiny takes a turn when he attempts to commit suicide and lands up in a hospital bed. There, he bumps into Khushi, a chubby girl with a carefree attitude. She insists Rachit to uncover the pages of his life and tell her what compelled him to take such a drastic step. Rachit starts to narrate his story, seeing no other option. He tells her that he dreamt of being an IITian and even achieved it. Things went well for some days, until that fateful day when Rachit was diagnosed with severe health issues. After a while, already heartbroken, Rachit takes a tough decision. He drops his IIT dream and follows the CA path. In this very process, he overlooks Radhika, a gorgeous Bengali girl, his batchmate as well as his girlfriend. What will happen to the love story of Rachit and Radhika? Will Rachit become a successful professional, and if yes, then at what cost? Does Khushi have a story of her own?

The last Hindi book that I had read was ‘Gora’ by Rabindranath Tagore during one of my train journeys from Jalandhar to Jodhpur more than fifteen years ago. So, naturally, I was a bit skeptic when I picked up ‘Khwaeshein …’ for review.

Though this book can in no way be compared to the masterpiece by ‘Gurudev’, I was pleasantly surprised by the richness of the words used. The language is beautiful for the most part of the narration, expressing the emotions of the characters beautifully. At places, modern slangs commonly used in day-to-day conversation between college students have been interspersed. But this is excusable as it is in accordance with the demands of the story.

Rachit’s interactions with Khushi and his romance with Radhika consume most of the pages and every moment has been captured with skill. The glimpses into the life of an IITian and subsequently a C.A. aspirant are not fresh by any stretch of the imagination but still exude nostalgia in the mind of anyone who has spent life in a hostel. The climax does pack a punch.

On the downside, the pace of the novel could have been a tad faster, but then, this is a book belonging to the genre of ‘romance’ and is not a thriller.

Verdict- A heart-warming story.
Posted by Anurag Shourie at 00:58