The Monk (A book review) 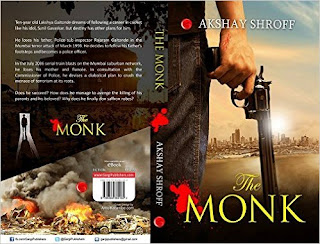 Blurb- Ten-year-old Lakshya Gaitonde dreams of following a career in cricket like his idol, Sunil Gavaskar. But destiny has other plans for him. He loses his father, Police sub-inspector Rajaram Gaitonde in the Mumbai terror attack of March 1993. He decides to follow his father's footsteps and becomes a police officer. In the July 2006 serial train blasts on the Mumbai suburban network, he loses his mother and fiancée. In consultation with the Commissioner of Police, he devises a diabolical plan to crush the menace of terrorism at its roots. Does he succeed? How does he manage to avenge the killing of his parents and his beloved? Why does he finally don saffron robes?

Book Review- ‘The Monk’ is author Akshay Shroff’s debut novel and as you flip through the pages, the inexperience starts showing. While the premise of the book is very promising, the execution leaves much to be desired. However, the author does seem to have abundant potential and I would be waiting to read his next book.

When the story begins, the reader is drawn into the life of Lakshya Gaitonde-a ten-year-old boy aspiring to be another Sunil Gavaskar. The bond between Rajaram and Shanti-Lakshya’s parents is poignant. The post-traumatic stress disorder that Lakshya endures after the death of his father is penned lucidly, offering a deep insight into the mind of a tortured soul. The author displays the gift of painting vivid imagery with his words.

The story starts to meander, thereafter.

Lakshya’s covert stint as an undercover agent has not been given enough weightage. There are too many characters (mostly Muslim) that enter and exit the story. The author could have focused more on Lakshya and his interactions with a limited number of characters. Another issue that irked me as the story progressed was the mixing up of fact with fiction. While ‘Hemant Karkare’ has been mentioned as a character, a ‘Dawood Ibrahim’ has been veiled by the name ‘Jalim Sheikh’. The author’s dislike for a certain religion is also much too overt when one reads page 70 and 71 of the novel; in fact, a few paragraphs are repeated.

The climax, well I have one word for it- preposterous…

Verdict- Good.  Could have been better though!!

About the Author- Akshay Shroff has been a successful advertising sales consultant of domestic and international media, spanning over three decades, first in New Delhi followed by Mumbai. He has been associated with voluntary organizations like the Lions and the Junior Chamber International in senior positions and also with trade bodies like the Delhi Advertising Club and the Press Club of India. Married to Jayna since February 1981, he has been a responsible family man, a doting father of Rohan and a loving father-in- law of Stuti. Has a Bon Vivant nature, nurturing friendships since over five decades. Travel, trekking, reading and writing have been his passionate hobbies. Lover of animals and Nature, dogs have been his companions on and off. While THE MONK is his debut novel, writing will now be his full-time engagement.